Arts in the Pacific, a tradition of exchange 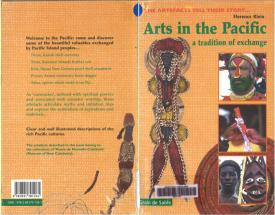 The artefacts tell their story... Arts in the Pacific, a tradition of exchange by Florence Klein. Welcome to the Pacific: come and discover some of the beautiful valuables exchanged by Pacific Island peoples...

Feathers, bark, fibres, wood, turtle shell, sect shells, bones, seed, resin: all the materials that can be harvested from the animal and plant worlds have been used by Pacific Islanders for centuries to make very inventive artefacts.

Some of these creations are highly valued forms of exchange currency. Many of them require a vast amount of work and are produced by very skilled specialists. Considered sacred, they symbolise the values of the clan and the magic of the ancestors. Woven into the fabric of the myths, dances, oratory and tradition of Pacific Island societies, these 'currencies' also act as their memories. Mada jahî fibre skirts, tevau feather coils, bilum bags: most of the artefacts described in this book come from the collections of Musée de Nouvelle-Calédonie (Museum of New Caledonia).

Welcome to the Pacific: come and discover some of the beautiful valuables exchanged by Pacific Island peoples...

As 'currencies', imbued with spiritual powers and associated with ancestor worship, these artefacts articulate myths and initiation rites and express the symbolism of aspirations and materials...

Clear and well illustrated descriptions of the rich Pacific cultures.

The artefacts described in this book belong to the collections of `Musee de Nouvelle-Caledonie' (Museum of New Caledonia).

This book is published by the Editions Grain de sable with the support of Musee de Nouvelle-Caledonie.